So amphibia are animals that live with two forms of life, first in fresh water and then continued on the ground. In amphibia there is a change in the respiratory and locomotor organs.

On land these animals no longer needed so that the gills for respiration and stimulates the formation of reduced lung. On changes in locomotor, while in the water body amphibia be light because of the upward buoyant force and allow for movement of the fin, but when the land will be heavier body so that the fins can not withstand the weight of the body.

Therefore, it is necessary legs to walk, this leg is assumed as a modified form of the pinna pectoral and pelvic pinna in Pisces. 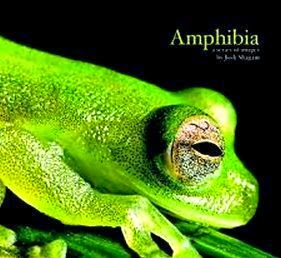 Amphibian metamorphosis can be seen in the image below Andi, Frog Metamorphic Amphibians have the characteristics, namely as follows: Her body was covered skin ampihbia 2.

It is a cold-blooded animal or Poikilotherm 3. Have two pairs of legs and on each leg there are swimming membranes between the toes and legs function to jump and swim in the water 5. The eyes have additional membrane called niktitans membrane function while diving in the water 6.

Breathing while still tadpole form of gills, as an adult breathing apparatus in the form of the lung and skin 7. The nose has a valve that serves to prevent water from entering into the oral cavity when diving in the water 8. Breed by releasing eggs and fertilized by the male outside its mother’s body, which is called external fertilization 9.

Not having nails and claws, but there are some members that the tip of his finger amphibia experience penandukan shaping nails akphibia claws, for example Xenopus sp. The skin has two glands are glands or glandular mucosa and berbintil usually poisonous Has the auditory system, in the form of auditory canal and tympanum known as tympanum Has the tooth structure, namely the maxillary teeth and the teeth of the palate.

The body resembles a worm roundwormsegmented, not limbed, and reducing tail. This animal has a compact skin, eyes reduced, covered by skin or bone, retina in some species function as photoreceptors. Example animal of Order Apoda or Gymnophiona 2.

The body of this amphiiba can be distinguished between the head, neck and body. 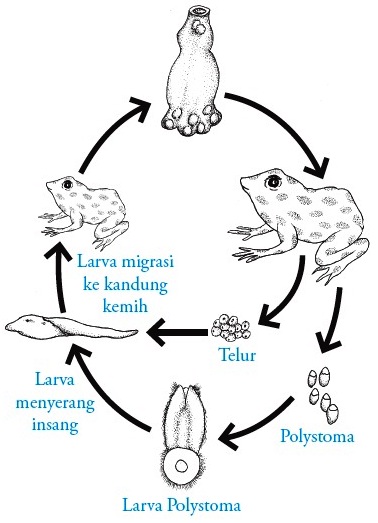 Some species have gills and others breathe with lungs. In this part of the head there is a small eye and in some kind of order are the eye is reduced. Members of the order Urodela live on land but cannot be separated from the water. Example animal of Order Urodela or Caudata 3.

Purpose of Practicum 1. Observing the characteristics of both morphology and anatomy of one instance of the class Amphibian and the morphology of Amphiiba Sp.

Classify organisms into the levels of classification categories based on their characteristics. Deepening the understanding of the various organ systems owned by a group of Frog Amphibian. Complete surgical equipment including iron cutter and scissors with sharp edges 3. A magnifying lens anphibia microscope stereo 5. Species of frog Bufo Sp.

Carbolic for disinfected 4. Procedure Before starting the main activities, prepare all the necessary equipment. To kill the specimen, anphibia chloroform with cotton into killing- jar. Then insert some frogs and tightly closed. Wait a few minutes. After the frog killed, take and put on a board or box section.

Perform the following activities: Noting that there are organs in the caput, truncus, and observe the extremitasnya. Describing the outer structure and name parts. Opened his mouth amphibi, observing the parts are in ramioris, then describe. Checking the distinguishing characteristic between males and female frogs.

Nailing each palm of his hand with a pin.

Doing surgery carefully with scissors or a knife section start at the midline kelaz the sternum on. To facilitate surgery, skin slightly removed using tweezers, then cut with slowly toward cranial up in the middle of the mandible. Then proceed to the caudal direction, until in the groin, and continued cuts to the thighs and arms. Lipatkan this skin melas. At the time of this leather cutting, notice: Saccus lymphaticus subcutaneus b. Septa as a barrier between saccus lymphaticus To open the abdomen, abdominal muscle cut from posterior to amphibiz along the median line to cut the sternum.

Noting the organs contained in the abdominal cavity.

The way these work is done to learn every organ system in the body of the animal in question. Began to pay attention to the topography of organs, then draw and name the parts. After the lifting of each organ system ranging from Systema digestive, respiratory Systema, Systema circulatorius, urogenital da Systema Systema nervorum.

In this activity, should be careful in order not to cut kels bantak network of blood is spilled yng mengakibatakan observation wmphibia. If this happens wipe the blood by using cotton. Describe and name the parts of each organ system has been appointed until the entire system organ in the abdominal cavity was observed.

To learn nervorum system, especially the spinal nerves. Removing the entire contents of the abdominal cavity so that the vertebral column terlhat clear. Between meetings spinal segments will come out to the left and to the right of the spinal nerves creamy. Branchialis plexus, and plexus ischiococcygeus. To view the brain, scalp first removed and then carefully cut cranium to be carefully then brain can be removed. Observing the parts of his brain. To observe the muscle system, must be taken from the first step to the skin of the abdomen open.

Surgery followed to the thighs, calves and upper arms. Subsequently turn the frog’s body so that the dorsal part of the body facing up.

Noting the large tendon Achiles. This animal from the general characteristic is grouped into class of amphibian. In this world, the most type of frog that we found is in two types. First type is the frog that has smooth skin with web among its digity and its leg fingers. Second type is the frog has rough skin and smooth web among digity and leg fingers and also has caws on fingers.

Both of this frog type have same characteristic that make them include into the class of amphibian. From the word of amphibian is from two greek words, those are amphios that mean two worlds and bios mean living or organism Campbell, Frog is the type of animal that have live phase in two worlds, when the frog still in larva phase or we call it tadpole, it lives in the water, especially fresh water until it has their complete extremities or limb. After the adult phase, it lives in the terrestrial but still through their part life in the water such as for reproduction and take off the eggs Irnaningtyas, The other characteristics will be explained on the system organ of the frog in the next paragraph.

In this practicum, as always we start our observation by inspected the morphology of frog that we found around our house. The frog body divided to dorsal and ventral area. The ante-posterior body side separated also into two part, those are cephalic and truncates. The dorsal side we found many parts that important to support the frog living. The first side that we found is rima oris or mouth.

Goes to the posterior side we found big eyes, it has one eye in dexter and one another in sinister. The eye has the other structures. We found the thick eye sheath on and under the eye.