To the accompaniment of the wind buffeting the church of St Jude-on-the-Hill, London, the Hilliard Ensemble here solemnly perform what must surely be the bleakest, most ritualistic Passion to be composed since Heinrich Schutz’s settings of the mid seventeenth century.

Never one to dress up his religious work in ostentatious garb, Arvo Part pat selected the most severe, detached and economical musical style for this Passion according to St John. More a liturgical act than a concert piece, it makes no concessions whatever to modern conventions of Passion music.

Stubbornly repetitive and monochrome, deliberately anti-dramatic and neutral, it achieves its extraordinary and noble effect through the simplest of means: The work plays for 70 minutes without a break, a fact emphasized by the ECM engineers, who—as if to discourage us from sampling here and there—have left the CD entirely unbanded. Not once during this vast span does the underlying tonality waver; once exposed, the small repertoire of textures merely rotates, combining into new orders. For the role of the Evangelist, Part writes for a mixed consort of four soloists accompanied by instruments.

Not all of them sing or play at any given time, and indeed the texture constantly reduces in some way, occasionally paring down to a single voice; but in character even this central narrative part remains stylistically consistent from start to finish.

What gives the setting its form and principal variety is, of course, the Biblical text, parh glows with uncanny radiance at the heart of the music. Because its scale is psrt intimate, Part’s Passion is not the easiest work to project in concert, nor did it quite work in televised form.

But on record it makes its full impact. So well do the Hilliard Ensemble and the Western Wind Chamber Choir now know the setting that they sing it with a conviction and familiarity that far transcends the majority of recorded performances of modern music. It is also a piece that seems tailored to their individual voices: Michael George’s rich bass for the solo part of Jesus, for example, and pawsio David James, who sings some high, exposed passages within the Evangelist quartet with ease and great beauty. The choice of St Jude’s, a richly resonant church, was inspired; the wind one may variously interpret as a startingly appropriate accident or as an act of God. 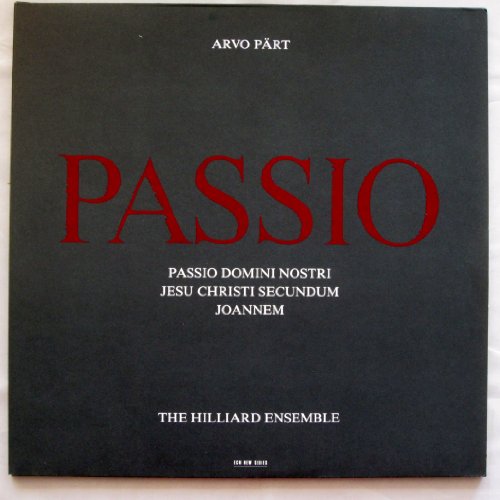 If you are a library, university or other organisation that would be interested in an institutional subscription to Gramophone please click here for further information. Skip to main content. The all-time greats Read about the artists who changed the world of classical music.

Gramophone’s expert reviews easier than ever before. Whether you want to see what we think of today’s latest releases or discover what our critics thought of your favourite recordings from the past, you will find it all in our full-searchable Reviews Database. Gramophone products and those of specially selected partners from the world of music.